Kim and David moved to Kinmundy/Wesley in July of 2014. Kueker is pronounced “KEY-ker” – if you wondered!

Kim Kueker grew up near Lebanon, Illinois, and graduated from Southeast Missouri State University with a BS and BS in Ed in mathematics. She has taught high school mathematics for twelve and a half years in Missouri and earned a Masters in Education from Southwest Baptist University. She also worked in the office for the St Louis Alzheimer’s Association and the School of Social Work and Gerontology Department at UMSL. She is a commissioned Stephen Minister and loves all sorts of church related activities, including Contemporary Christian music. Kim has worked as a leader with the Walk to Emmaus, Upward Sports, Beth Moore studies, Youth Alpha and participated in Disciple Bible Study and Financial Peace University.

Pastor Dave was born in Belleville, Illinois, and grew up in Champaign, Illinois. After graduating from Eastern Illinois University (BA/French) and the Southern Baptist Theological Seminary of Louisville, KY (M.Div), Dave has served as a full-time United Methodist church pastor in the Illinois Great Rivers Conference since 1980. He was ordained an Elder in 1983.

Dave also works with district lay speakers and certified lay ministers, his District Superintendency Committee & District Committee on Ministry, serves as treasurer for the Skillet Fork Cluster of United Methodist Churches, is vice-chair for the Board of Discipleship for his conference and is involved in a variety of writing projects. He has taught an online course, Disciple Making 101, at www.BeaDisciple.com multiple times a year from 2008-2013.

He is active on Facebook as David Oliver Kueker. 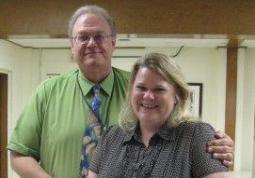 I grew up in the Missouri Synod Lutheran Church and
experienced a life changing spiritual experience when the Jesus
People came through Champaign, Illinois, in February of 1972. I
was drawn through the beautiful music and electric guitar playing
that later became Contemporary Christian worship music. I still
play the guitar!

Everything in my life as a high school junior changed overnight.
I began attending a different small group Bible study or prayer
meeting every night of the week.

I was active in a variety of Christian groups on campus at
Eastern Illinois University, attending all sorts of churches, and
then became a Baptist prior to attending Seminary. I understand
how we can come from all kinds of places and backgrounds.

While in Seminary, working with youth at a United Methodist
Church, I found that I felt very much at home with John Wesley’s
evangelical warmth and the openness & inclusiveness of the
United Methodist Church … after all, they welcomed me!
And we welcome you as well! 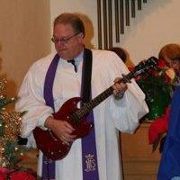 1 Response to Our Pastor