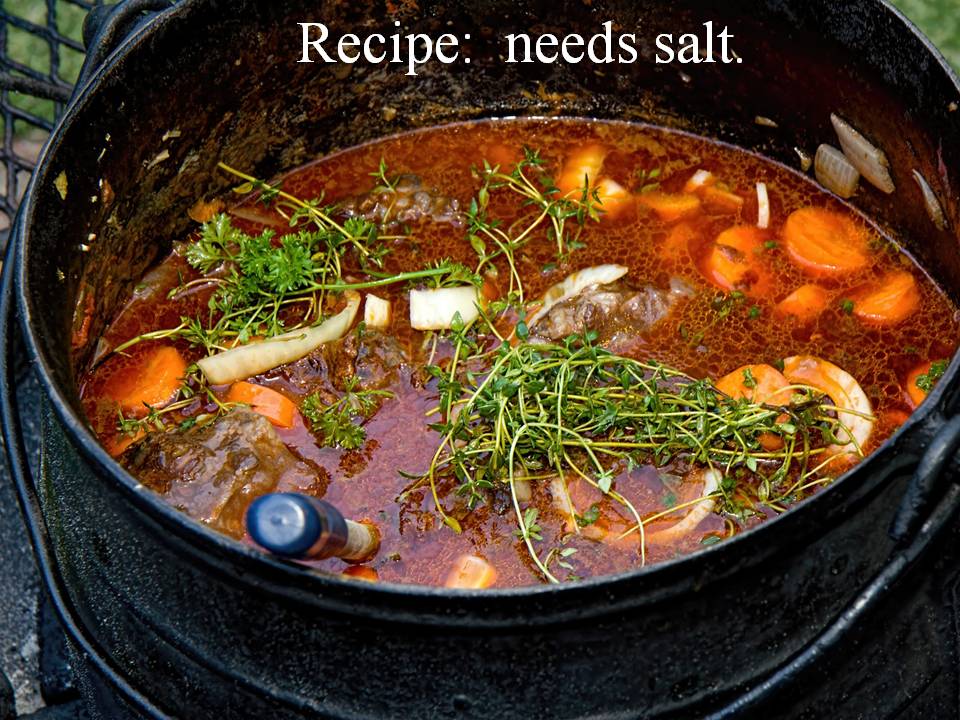 MONDAY SCHOOL – thoughts from the message this past Sunday:

Why does salt make food taste better? If I understand the science properly, it’s not so much that salt has a taste: instead salt doesn’t change the food itself but changes our perspective on what we are tasting.

Quote: Perhaps you’ve heard the old saw about salt bringing out the flavor of a dish. Well, the scientists at the Monell Center say it’s absolutely true. The reason: Some flavor compounds are too subtle to detect, but when you add even just a teeny amount of salt, neurological magic happens: Suddenly, our taste receptors can detect flavors they weren’t able to sense before. So, when you add salt to roasted squash, the squash doesn’t merely become salty; rather, the myriad complex flavors of the vegetable come to the fore. Add a bit of salt to bread dough, and likewise, the bread doesn’t necessarily taste salty; it just tastes the way bread should. [1]

In addition to being a general flavor amplifier, salt has a special ability to enhance sweetness in foods. Taste two chocolate puddings that are the same in every way except that one contains a bit of salt and the other none: The one with salt will taste sweeter. That’s because sodium ions zero in on bitter flavor compounds and suppress them, making the sweet flavors seem stronger. For the same reason, salt makes bitter foods more palatable. [2]

Jesus said in Matthew 5:13 “You are the salt of the earth; but if salt has lost its taste, how shall its saltness be restored? It is no longer good for anything except to be thrown out and trodden under foot by men.

Schweizer notes that a common Jewish expression at the time was to call the Laws the “salt and the light” of the world, which may mean this section is an introduction to the discussion of Mosaic law that will soon commence. In the Rabbinic literature of the period salt was a metaphor for wisdom. [4]

Wisdom certainly does change our perspective on reality, on how life “tastes” – like salt. But what does this idea say about a person losing their saltiness?

The literal translation of the Greek: μωρανθῇ, mōranthē, “loses its savor”, is “becomes foolish”.[25] In Aramaic, the same term is used for losing savor and becoming foolish. Some have speculated that “became foolish” is thus a mistranslation by someone who did not realize the dual meaning of the Aramaic. Gundry feels that the idea of foolish salt is such “utter nonsense” that no translator would ever make such a mistake; he feels it is more likely that the Semitic expression had been assimilated into Greek and that became foolish was an expression for losing savor. English language translators universally accept that the verse is talking about flavor rather than intelligence. Some scholars do feel that this may be wordplay related to the Rabbinic use of salt as a metaphor for intelligence. [5]

I find it unusual that scholars would assume that Jesus would not have made use of a clever play on words like that described. Is Jesus not clever? This makes sense to me.

When we rise up out of our chair and go to and fro in our neighborhoods, we are going to come into contact with people who are experiencing the bitterness of life. But the wisdom of Jesus, transferred from us to our neighbors like the taste of salt, can decrease the bitterness and increase the sweetness for everyone we come in contact with in our neighborhoods. The wisdom of Jesus can genuinely change how we experience our lives.

[4]  Schweizer, Eduard. The Good News According to Matthew, Atlanta: John Knox Press, 1975, quoted in Matthew 5:13; From Wikipedia, the free encyclopedia, at  https://en.wikipedia.org/wiki/Matthew_5:13.

The photo is by stevepb and is from Pixabay.

This post is based on the sermon “Stepping Into The Triangles” from the sermon series “Out of the Chair, Into The Triangles”
Pentecost, November 12, 2017, at Kinmundy United Methodist Church.
Slides and audio for this message can be downloaded from http://www.disciplewalk.com/K_Sermons_June_Aug_2017.html