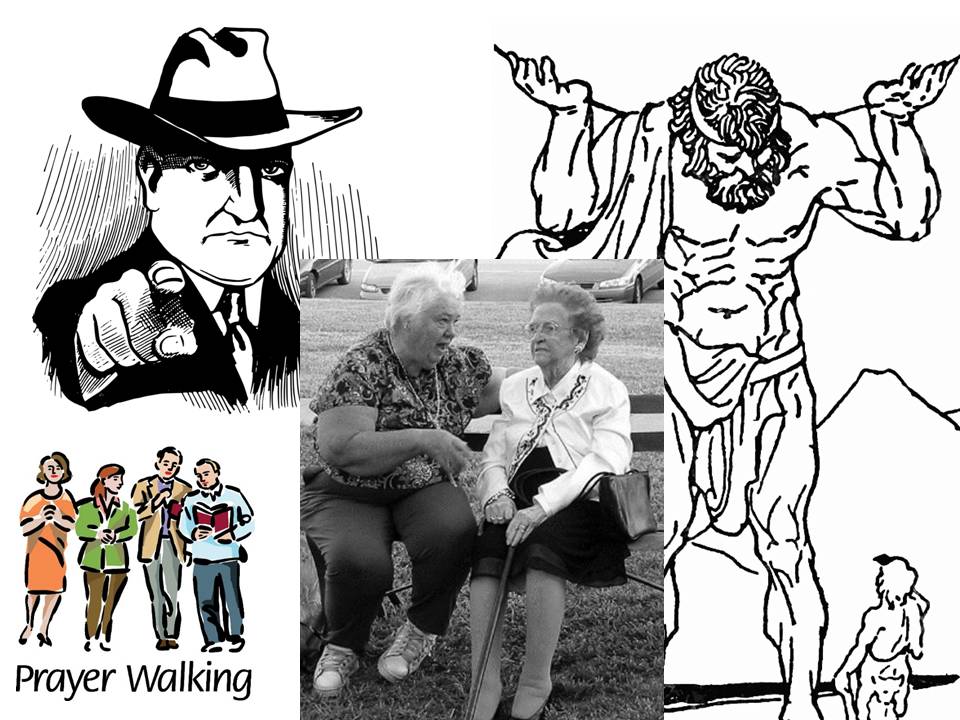 MONDAY SCHOOL – thoughts from the message this past Sunday:

When you come up out of your prayer chair and start traveling through your neighborhood, you’re going to be dealing with real people. Real people live real lives, and real life isn’t always wonderful.

Real people have issues. And when someone comes to the door, you don’t really know how they are feeling. That’s why we’ve been talking in worship about psychological games … it will give you a clue as to what is going on. In the game, “Ain’t It Awful” the game begins when you are invited to be critical of another person. In “Let’s you and him fight” the game begins when you are encouraged to attack someone in order to help or protect your friend. And in the big game, the Karpman Drama Triangle, you are approached by a victim who feels unfairly treated by a persecutor. The victim blames the persecutor (Ain’t It Awful) and asks you to defend them (Let’s You And Him Fight). The victim tries to get you to be upset and angry. And the game just goes around and around the circle.

Here are the three roles, according to Wikipedia.:

Last Saturday I was upset with myself, and I found myself playing all three roles. I had made a mistake and was reminded of it. I felt extremely angry, and decided to figure it out with a tool called “The Five Whys:” 5 Whys is an iterative interrogative technique used to explore the cause-and-effect relationships underlying a particular problem.[1] The primary goal of the technique is to determine the root cause of a defect or problem by repeating the question “Why?” Each answer forms the basis of the next question. The “5” in the name derives from an anecdotal observation on the number of iterations needed to resolve the problem. The technique was formally developed by Taiichi Ohno and was used within the Toyota Motor Corporation during the evolution of its manufacturing methodologies.  [2]  You ask “Why?” five times or more, until you completely understand.

Here’s how it worked.

I’m angry (feeling). Why are you so angry?

Because I made a mistake. I forgot to bring something for this meeting. Why did you forget?

Because I’m stupid. I put it by the door and then just walked past it. Distracted. Why do you feel stupid?

Because I caused the problem; only I can fix it. This wasn’t true. But by the time I realized that someone else could have brought what I had forgotten, it was too late to turn back and go on. I had let me feeling of being responsible for the problem create a situation where I felt that only I could make it right. Not only that, but because I felt responsible, I didn’t want to ask someone for help; I would feel embarrassed. Or ashamed.

The key value, however, is to ask “why?” and listen. And repeat until the person has said all that they want to say. It doesn’t happen very often that someone listens to you until you’ve said everything you want to say … listening is a powerful way to be care filled toward someone.

So – if you are upset, ask yourself if you are playing a game. Then ask why until you understand what you are doing. Or better yet … go ask someone to listen to you. Like your pastor, perhaps. We don’t need to have all the answers – if we can be patient and learn to listen, the person will provide their own answers.

[1] Karpman drama triangle; From Wikipedia, the free encyclopedia, at https://en.wikipedia.org/wiki/Karpman_drama_triangle

[2] 5 Whys; From Wikipedia, the free encyclopedia, at https://en.wikipedia.org/wiki/5_Whys

The images are from ChurchArt.com, a subscription service.

This post is based on the sermon “Stepping Into The Triangles” from the sermon series “Out of the Chair, Into The Triangles”
Pentecost, November 12, 2017, at Kinmundy United Methodist Church.
Slides and audio for this message can be downloaded from http://www.disciplewalk.com/K_Sermons_June_Aug_2017.html