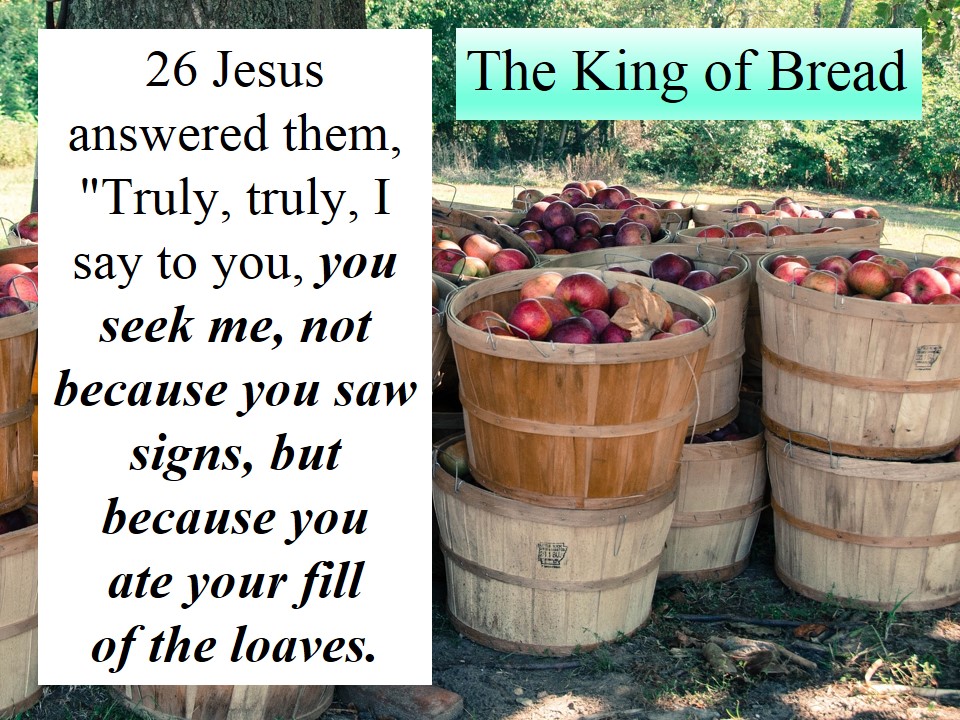 MONDAY SCHOOL for Pentecost, October 1, 2017, Tuesday Morning Prayers – thoughts from the sermon The King of Bread (Not).

John 6:13 So they gathered them up and filled 12 baskets with fragments from the five barley loaves left by those who had eaten. Verse 14. When the people saw the sign which he had done, they said, “This is indeed the prophet who has come into the world.” They were amazed because of the bread. Perceiving then that they were about to come and take him by force to make him king, the king who would provide everyone with all the bread they wanted, Jesus withdrew again to the mountain by himself.

He literally walked away from them because what they wanted was the bread. And notice: they had high energy. They were highly committed, fully devoted followers of Jesus. They were followers of Jesus Christ that would do anything to get closer to him. Look at the next verse after the walking on water part. Verse 22: On the next day, the people who remained on the other side of the sea saw that there had been only one boat there and that Jesus had not entered the boat with his disciples, but that his disciples had gone away alone. However, boats from Tiberias, the other side of the Sea of Galilee, came near the place where they ate the bread after the Lord had given thanks. So when the people saw that Jesus wasn’t there, nor his disciples, they themselves got in the boats and went to Capernaum to seek Jesus. “Where’s Jesus? Where’s the guy who has all that bread? Because I need me some bread.”

Verse 25:  when they found them on the other side of the sea, a long hard trip. They said to him, “Rabbi, when did you come here?” I think you can hear in those words, “we like to know your schedule. We like to know where you’re going to be because we know that where you are, there’s going to be plenty to eat.” Now, if you’ve ever been starving, you can kind of understand that motivation perhaps, the desperation that people have when they have nothing. But the important point is why do they have this intense desire to follow Jesus? Jesus names what it is.

It might be more acceptable if these people were starving, but they had lots of energy to chase after Jesus. It seems more to me that in Jesus they saw a sure thing, one who would provide for all their needs … if they were close to him. And so their desire was for what he could provide, not a desire for him. They did believe in him … but what they believed is that he would give them what they wanted. It’s a question we should ask ourselves: are we here because of the benefits of our faith?

If that’s all that’s true, we have a faith that will last as long as the bread lasts. It’s a faith focused on our own self-interest and perhaps also on fear of punishment or abandonment. A psychiatrist once asked a troubled child why he loved his parents. “That’s easy,” he snorted. “They’re bigger than me and they have the food.”

And if we get a better offer, we’ll be following someone else. In time, Jesus knew,  some of these seekers after bread would cry out “Crucify him!” Everything is fine until the bread runs out.

How important are answered prayers to you? How do you feel when God says “No” or “Not yet” to your prayers? Will you still be faithful if you don’t get what you want? Would you still follow Jesus if it got a little harder? When the hard times come? Or while the bread lasts?

This post is based on the sermon series Out of the Chair, Into the World at Kinmundy United Methodist Church. Slides and audio for this message can be downloaded from http://www.disciplewalk.com/K_Sermons_June_Aug_2017.html