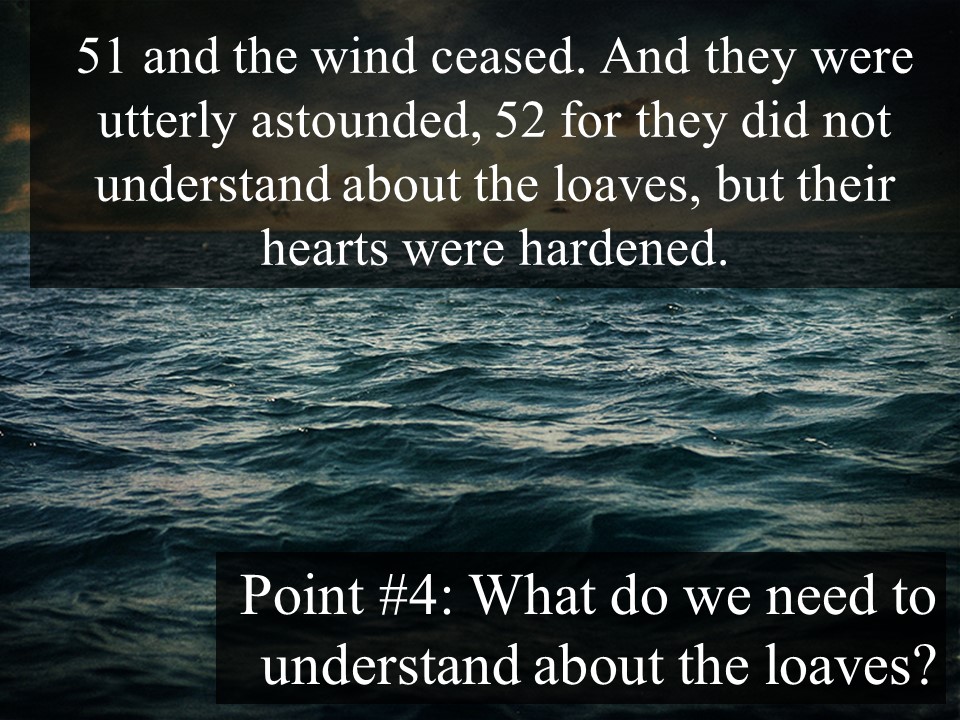 And here’s what happens after Jesus gets into the boat. Suddenly, the winds cease. The problem went away, and they were utterly astounded. Verse 52, for they did not understand about the loaves, but their hearts were hardened.

This is quite odd. What is it that we’re supposed to understand about the loaves? Why is the fact that Jesus took 5 loaves of bread, broke them and fed 5,000 people so important? What’s that got to do with a boat out in a storm and a bunch of disciples that think that they’ve seen a ghost? Well, see, here’s the third thing: If you knew what God could do, you would not be afraid. If you understood how much God loved you and the people you love, you would not be afraid because if you understood that, you could have faith. So what is the message of the loaves?

By the way, Jesus talks about this in several different times. In Mark 8, two chapters later, Jesus feeds 4000 people with seven loaves of bread – it’s very similar. After that, he has a confrontation with the Jewish leaders, and they get into the boat to head to the other side of the sea of Galilee. 13 And he left them, and getting into the boat again he departed to the other side. 14 Now they had forgotten to bring bread, and they had only one loaf with them in the boat. 15 And he cautioned them, saying, “Take heed, beware of the leaven of the Pharisees and the leaven of Herod.” 16 And they discussed it with one another, saying, “We have no bread.” 17 And being aware of it, Jesus said to them, “Why do you discuss the fact that you have no bread? Do you not yet perceive or understand? Are your hearts hardened? 18 Having eyes do you not see, and having ears do you not hear? And do you not remember? 19 When I broke the five loaves for the five thousand, how many baskets full of broken pieces did you take up?” They said to him, “Twelve.” 20 “And the seven for the four thousand, how many baskets full of broken pieces did you take up?” And they said to him, “Seven.” 21 And he said to them, “Do you not yet understand?”

But you see, Mark 6 says, their hearts were hardened, a very interesting phrase. It doesn’t say their minds were clouded. It doesn’t say that they misunderstood intellectually. It seems to indicate that the heart of their misunderstanding is a lack of emotion, and unwillingness to care, a hardness of the heart. Hardened hearts is an emotional problem. The reality that God loves them this much has not sunk into the heart. They don’t feel it. And so, to them, when Jesus gets in the boat, it’s like just another person, not the son of God, not the representative of God sharing God’s word with us, not the voice, the logos that

And so, to them, when Jesus gets in the boat, it’s like just another person, not the son of God, not the representative of God sharing God’s word with us, not the voice, the logos that speaks from God. It’s just a man. And they’re astonished, “Why did the wind stop when Jesus got in the boat? We don’t understand.”

QUESTIONS
Is there a time in your past when you feel that God has provided?
How did you feel before the problem resolved?
Did you worry?
How did you feel after the problem resolved?
Did the resolution of your problem seem like the miracle – that something like five loaves expanded to fill a much larger need?
How did it feel to you emotionally?
Have you taken time to feel the emotions of being cared for in the time of your need?

The photo “The Time I Was Daydreaming” is by Taylan Soytürk
and is from https://www.flickr.com/photos/taylansoyturk/9628065221/
courtesy of the Flickr.com Creative Commons license.

This post is based on the sermon series Out of the Chair, Into the World at Kinmundy United Methodist Church.
Slides and audio for this message can be downloaded from http://www.disciplewalk.com/K_Sermons_June_Aug_2017.html