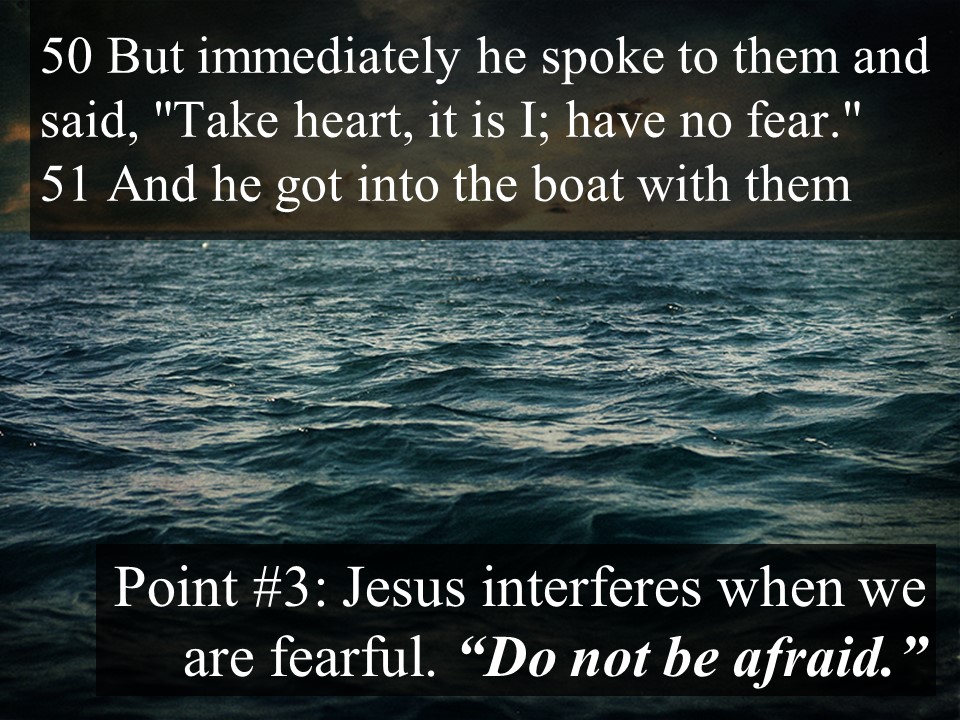 MONDAY SCHOOL for Pentecost, September 17, 2017. #4 – thoughts from the sermon Into The Neighborhood.

Jesus was walking on the water and came toward the disciples, but was going to pass on by where they were. I’ll be very honest with you, I don’t think the disciples were bothered or afraid of the storm at all. Do you know why? Here’s why: immediately He spoke to them when they were terrified and said, “Take heart, it is I; have no fear.” And then He got into the boat with them.

What caused Him to get in the boat was not the storm, but the fact that they became afraid. There’s something about being afraid that corrodes faith. If you’ll read through the Bible from Genisis to Revelation, God appears, an angel appears, the women come to the tomb and the angels are there, Jesus has risen from the dead. What’s the first word they say? Do not be afraid. Fear not.

But, friends, when we’re afraid, all of a sudden everything else we’re doing stops working quite as well. The disciples had plenty of faith with regard to the storm, but the minute they had fear, they no longer had the strength of their faith. They were no longer going to be able to deal with the storm, with the difficulties, with the problems that they had with the same strength of confidence that they had before. The minute they became afraid, all of a sudden Jesus saw a problem that He felt needed His direct involvement.

When Jesus sees that we are afraid, He’s closer than you think. And in fact, here’s the main reason they’re afraid: there’s someone out there. Couldn’t possibly be Jesus. Has to be a ghost. It never occurred to them that Jesus was coming toward them, so they assumed it was a ghost. Jesus is closer than you think. They were out on the sea and they were not looking for Jesus.

Friends, the next time you’re in a storm, the next time it’s difficult, the next time you’re pushing against the wind, please know God may have confidence in you, but still – Jesus may be closer than you think. The next time you feel afraid, afraid for what’s happening in the present, afraid of what might happen in the future, afraid because of wounds and hurts that have come to you from the past. Whatever the reason you might be afraid. Think for a moment – Jesus may be closer than you think. So that when you look off, friends, it’s not a ghost coming toward you – not one more reason to be afraid. Jesus is coming by. Once they were afraid, all of a sudden, it was important to Jesus to speak to their hearts to remind them, “Take heart. It is I have no fear.” To get into the boat and be with them once they were afraid because fear is a bigger problem than the storm.

I know all of you have heard the famous phrase, “The greatest thing we have to fear is fear itself.” Do not be afraid.

When you feel afraid, what helps? What do you do?
Would it help you to keep rowing if Jesus got into the boat with you?

The photo “The Time I Was Daydreaming” is by Taylan Soytürk
and is from https://www.flickr.com/photos/taylansoyturk/9628065221/
courtesy of the Flickr.com Creative Commons license.

This post is based on the sermon series Out of the Chair, Into the World at Kinmundy United Methodist Church.
Slides and audio for this message can be downloaded from http://www.disciplewalk.com/K_Sermons_June_Aug_2017.html