Posted on September 12, 2017 by David Kueker
MONDAY SCHOOL for Pentecost, September 10, 2017. #4 – thoughts the sermon Into The Neighborhood. 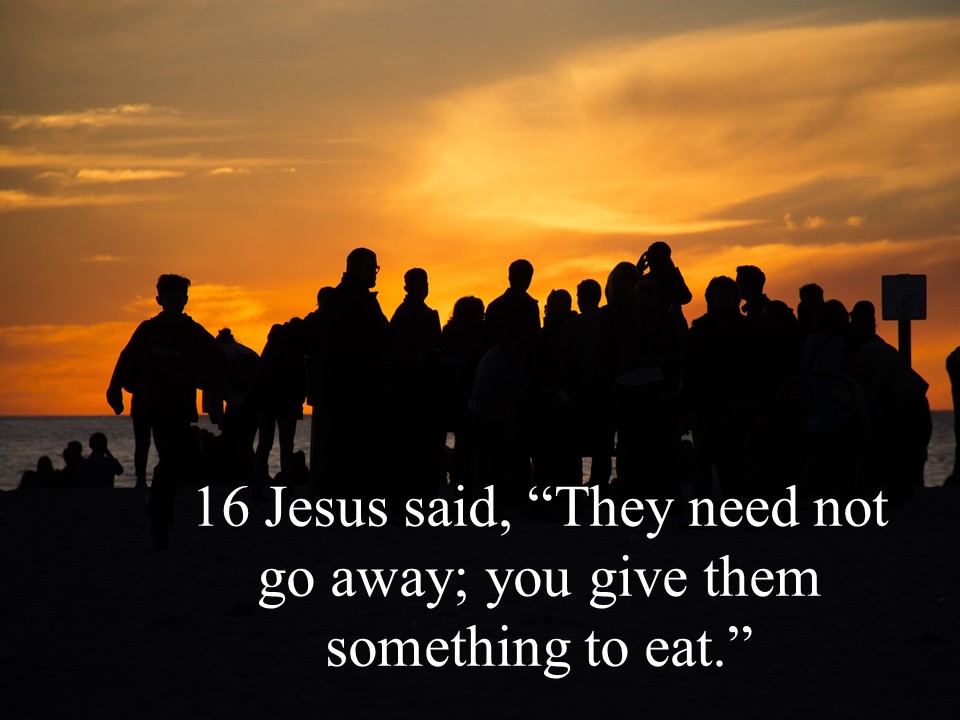 And so Jesus is headed toward that shore and he sees all these people, and he says to himself, “Oh no. What’s happened to the neighborhood?” Because they all want a piece of Jesus. But he chooses to have compassion and goes on shore and begins to heal them and meet their needs. And this goes on all day long. In fact, it happened several times – in Matthew 15 as well. It goes on for three days in another place. There’s a third place in Mark that describes where the same thing happened. But at the end of the day, Jesus is aware that these people who are with him, they are hungry. So he decides that it’s time for a little bit of education for the disciples with regard to loving your neighbor.

Matthew 14:15, “When it was evening, the disciples came to him and said, ‘This is a lonely place and the day is now over. Send the crowds away to go into the villages and buy food for themselves.'”

Now, on the surface, this is a good idea. All of these ducks have a home. Send the ducks back home! We have a problem here. People are hungry. Send them off and let them take care of themselves. That’s the kind thing to do. So at the first level, you begin to think, “Wow, the disciples really care about these people.” They are practicing empathy and thinking about how the people’s needs could be met.
But you know what’s underneath this? Not my table. Have you ever been in a restaurant where you wanted a waiter to come by and help you and you stopped one, but the waiter said, “Not my table, no
t my station, not my problem?” And, in fact, I’ll be honest with you, there are times I’ve been in a restaurant, I’ve literally gotten up, walked over to the station, got the coffee pot and refilled my own coffee. It always appalls everyone I’m with. But underneath this little saying is this idea: let’s help them by telling them that it’s not our problem, that they need to be self-reliant and take care of themselves.
Sometimes that’s good advice. If you tie your children’s shoes every morning for 22 years, when they’re 22-years-old they will not know how to tie their shoes. So in some times and places, this is good.
But here’s what Jesus says. Here’s what Jesus says. Here’s what Jesus says. Jesus looks at his disciples and he says, “They need not go away. You give them something to eat. Make the choice of compassion. You give them something to eat.”
And you know what their first response is? This is the second one you hear a lot. “We can’t afford it.” Jesus said to Philip, “How are we to buy bread so that these people may eat?” Philip is the one who popped up and said it would take 200 denarii worth of bread, 200 days worth of labor, or, in other words, 40 weeks of salary. You take 40 weeks of your salary, 9 months of the year,, and that’s when Philip says it’s going to cost that much.
Jesus says to Philip in John’s version of this, “How are we to buy bread so that these people may eat?” But Jesus said this to test him because Jesus already knew what he was going to do. Jesus had a lesson to teach here. The disciples looked in the treasury; there was not enough. Not only that, there was no place to buy bread there in the wilderness! We have a terrible tendency to limit God by counting what we have and then saying, “Lord, there’s not a thing I can do.” Or saying that there is no place to shop for what we need. Or they are out of stock. We accept our human limitations and then are tempted to give up. One of the points that Jesus is trying to make is that you don’t count what you have and then decide what God can do.
In Mark 6:38, and Jesus said to them “How many loaves have you? Go and see.” We do need to ask the question, how many loaves do we have? What do we have with which we can show compassion? And here’s the interesting thing in John. One of His disciples, Andrew, Simon  Peter’s brother, said to Jesus, “there’s a lad here who has five barley loaves and two fish. But what are they amongst so many?”
Now, what’s the point of this? When you start counting what we have, you just don’t count what you have. You count what everybody present has. All of us who are neighbors are in this together. It’s interesting that Andrew turns out to be the one who notices:  Hey, I was talking to this boy. No one else has any food is the implication here. But somehow he’s got five barley loaves and two fish. Let’s take them. I don’t mean it that way. What I mean is Andrew noticed individual people. This time it happened to be a young person who had what provided for everyone who was there. Luke 9:14, and He said to his disciples make them sit down in companies of about 50 each. And they did so. Made them all sit down. And taking the five loaves and the two fish, He, Jesus looked up to heaven and blessed and broke them and gave them to the disciples to set them before the crowd. And a miracle begins to happen because all of a sudden there is enough.
QUESTIONS
What’s your position on miracles?
Do you enjoy the possibility that anything is possible?
Do you like divine surprises?
Why would that be a person’s preference, in your opinion?
Or would you prefer that everything be explained as not miraculous or supernatural?
Why would that be a person’s preference, in your opinion?
RESOURCES
The photo “pacific-ocean-1165600_1920” is by chabotphoto and is from Pixabay.
This post is based on the sermon series Out of the Chair, Into the World at Kinmundy United Methodist Church.
Slides and audio for this message can be downloaded from http://www.disciplewalk.com/K_Sermons_June_Aug_2017.html
All Scripture quotations are from the Revised Standard Version of the Bible, copyright © 1946, 1952, and 1971 National Council of the Churches of Christ in the United States of America. Used by permission. All rights reserved.
This entry was posted in Sermons 2017. Bookmark the permalink.