MONDAY SCHOOL for Pentecost, September 10, 2017. #2 – thoughts from the sermon Into The Neighborhood. 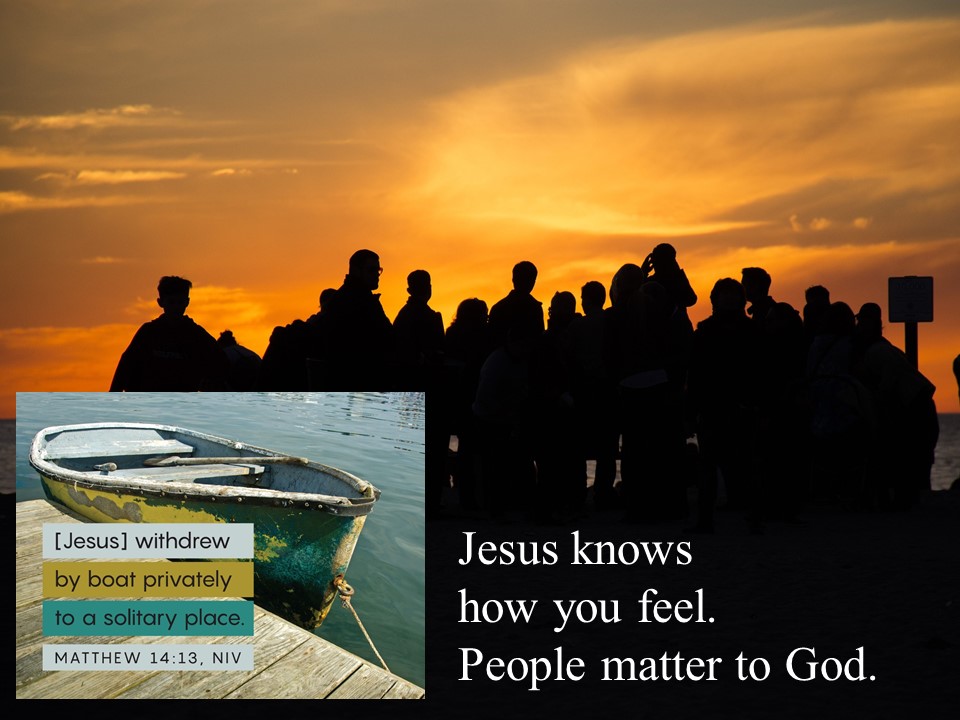 Jesus was tired, the disciples were tired, they had been involved in exhausting ministry to others; it says they were so busy there wasn’t even time to eat. How strange, how could such a thing happen? Still, that’s how busy they were.

And Jesus said, I want to get in the boat, I want to go to the other side of lake, I need some time with God, I need some time to be surrounded by quietness, I need some time to pray. In other words, as we’re talking about in this series, Jesus needed to spend some time with God in his prayer chair. And as the boat got closer and closer to the shore they began to make out that there was a crowd on the shore, I don’t know how many people were there when they first saw it but by the end of the day, there were 5,000– more than 5,000 people. Can you imagine what it’s like for Jesus to be headed toward that shore?

Let me give you just a little bit of information. Emotional difficulties begin somewhere and the emotional difficulty that we speak of as the depression often comes from a moment when something happens in the past and we think it will never be different. This thing in the past will last forever. Now, depression is very complicated but way down at the root there is something at the past that we think will last forever. With anxiety, we look into the future and we see something terrible that we’re afraid will happen, maybe a hurricane. Anxiety is fear toward the future, depression is grief about the past that seems never-ending and the human response to both of these are typically frustration, typically anger, “Lord, we don’t want this hurricane, make it go away.”

Sometimes when it’s something in our life we direct anger at the problem and we get angry – which can be a way of pulling together energy to do something about it – but there are so many things in our lives that we are helpless to fix. We just need to accept what reality is and move on. This is the heart of the serenity prayer – to ask for serenity for the things which can’t be changed, the courage to changes what we can, and the wisdom to know the difference.

Ahead of himself, he sees people who need his help and so he moves toward the shore to do what he can. Jesus knows how you feel because people matter to God. And if people matter to God, probably they should matter to us. There we are, in the boat, and we come to the shore, and it’s not what we wanted. It is a conscious choice to have compassion. And that’s the choice that Jesus made.

You may be tired, and you may even be frustrated or angry. But you always have a choice. Choose wisely.

When have you recently had a choice to make about being compassionate?

What was your choice?

What was the outcome?

The other image is from ChurchArt.com, a subscription service.

This post is based on the sermon series Out of the Chair, Into the World at Kinmundy United Methodist Church.

Slides and audio for this message can be downloaded from http://www.disciplewalk.com/K_Sermons_June_Aug_2017.html